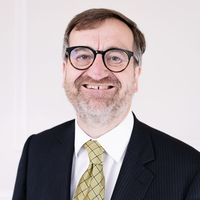 Peter Hutchinson BSc (Hons), MBBS, PhD (Cantab), FRCS (Surg Neurol) FMedSci is Professor of Neurosurgery, NIHR Research Professor and Head of the Division of Academic Neurosurgery at the University of Cambridge. He is Director of Clinical Research at the Royal College of Surgeons of England.

He holds an Honorary Consultant Neurosurgeon post at Addenbrooke’s Hospital with a sub-specialist interest in the management of neuro-trauma, specifically head and traumatic brain injury. He has a research interest in acute brain injury, utilising monitoring technology to increase the understanding of the pathophysiology of brain injury, and in the investigation and treatment of concussion. He also leads the international RESCUE studies evaluating the role of decompressive craniectomy in traumatic brain injury. He was awarded the Olivecrona Prize (the “Nobel Prize for Neurosurgery”) for his work on cerebral metabolism in acute brain injury).

He has co-authored over 500 publications (including NEJM, Lancet and Brain) and been lead applicant in over £15m of grants (including MRC and NIHR). He is joint editor of the Oxford Textbook of Neurological Surgery and “Head Injury – A Multidisciplinary Approach”.

He is Director of Clinical Studies at Robinson College, Past President of Clinical Neurosciences Section of the Royal Society of Medicine, Director of the Research Fund of the European Association of Neurosurgical Societies, Treasurer of the International Neurotrauma Society and Chief Medical Officer for the Formula One British Grand Prix.